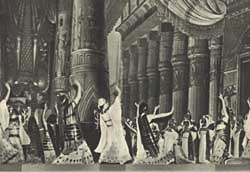 ACT I. In ancient Egypt, near the royal palace at Memphis, Radamès learns from the high priest, Ramfis, that Ethiopia soon may bring war to the Nile valley. The young officer hopes he will be chosen as commander of the army, envisioning triumph so he can free his beloved Aida, Ethiopian slave of the proud Princess Amneris. Amneris, who herself loves Radamès, jealously senses his feelings for Aida when the three meet. A procession led by the King arrives to confirm that the Ethiopians are advancing on Thebes. He appoints the jubilant Radamès as Egyptian commander, at which shouts of victory fill the air. Left alone, Aida is torn between her love for Radamès and for her native land: though now a slave, she is in fact the daughter of Amonasro, king of Ethiopia. She prays to the gods for mercy.

In the temple, as priestesses chant the praises of Ptah, priests consecrate Radamès’ sword in a sacred ritual.

ACT II. Ethiopia has been defeated. Amneris, entertained by slaves, prepares for Radamès’ triumphal entry into Thebes. When Aida approaches, the princess dismisses her other attendants and tries to learn Aida’s private thoughts, first pretending Radamès is dead, then saying he is still alive. Certain from Aida’s reactions — horror, followed by joy — that her slave loves Radamès, Amneris leaves for the festivities. Aida reiterates her prayers.

At the city gates, victory is celebrated in parade and dance, a ceremony observed by the King and Amneris. Radamès is borne in and crowned with a victor’s wreath. Captured Ethiopians follow, among them Amonasro, Aida’s father, who signals her not to betray his identity as king. Impressed by Amonasro’s eloquent plea, Radamès asks as his reward that the priests’ death sentence on the prisoners be overruled and that they be freed. The King grants this, as well as Amneris’ hand, but keeps Amonasro in custody.

ACT III. On a moonlit bank of the Nile, Amneris is led by Ramfis to a temple of Isis for a wedding vigil. Nearby, waiting for Radamès, Aida is overcome with nostalgia for her homeland. Amonasro, who suddenly appears, preys on these feelings, forcing his daughter to agree to ask Radamès where the Egyptian army plans to enter Ethiopia. This she does when Radamès appears, ardent with dreams of their future life together. Just as he reveals the military secret, Amonasro steps out of hiding, and Ramfis and Amneris come forth from the temple. While Aida escapes with her father, Radamès surrenders to the priests as a traitor.

ACT IV. In a temple of judgment, awaiting trial, Radamès is unmoved by Amneris’ offer to save him if he will renounce Aida and marry her. When he is led away, Amneris’ pride dissolves, her love for Radamès revealed by her agony in hearing him condemned to death. Enraged, the princess curses the judges. Buried alive in a crypt, Radamès is joined by Aida, who has hidden there to share his fate. The lovers bid farewell to earth as Amneris, above the tomb, prays for peace.