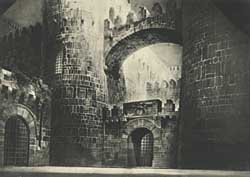 The story:
In Biscay and Aragon, at the beginning of the 15th century.

Act I. The duel. In the hall of the Aliaferia palace a group of bodyguards await the count of Luna who spends his nights guarding the dwelling of Leonora, princess of Aragon. He is in love with her, but fears the arrival of the Troubadour, knowing that the princess’ heart has been smitten by him. The chief bodyguard Ferrando narrates the events surrounding the burning at the stake of a gypsy for having bewitched the son of the old count of Luna; he also tells how her daughter Azucena, for revenge, kidnapped and burned at the stake the young boy. It is night. In the palace garden Leonora confides to her friend Ines her love for the Troubadour; the two women finally retire to their apartments where the count is hidden, determined to talk with Leonora. The Troubadur’s song is heard in the distance; Loenora goes forth to embrace her beloved, but, confused by the darkness, she embraces the count instead. When the moon comes out from behind the clouds and illuminates the scene she discovers her error and throws herself at the feet of the Troubadour, begging his pardon. Outraged, the count orders the Troubadour to reveal his identity: he is Manrico, an exiled follower of the rebel Urgel. Leonora tries to intercede, but the two challenge each other to a duel. Leonora faints.

Act II. The gyspy. In the gypsys’ camp Manrico (who, despite being wounded, has won the duel and spared the count’s life) talks with his mother Azucena. The gypsy tells him of past events: to revenge her own mother’s death she had kidnapped the count’s son, but, blinded by rage, she had mistaken him for her own son at the moment she had thrown the baby onto the fire. Perturbed, be inquires about his own identity, but she remains elusive and tells him to think only of avenging her. A messenger brings news that Castellor has been beseiged by Ungel’s army and that Leonora, thinking Manrico dead, has decided to enter a convent. Manrico hurries to intercept her. Near Castellor, the count is waiting for the passage of Leonora: his intention is to abduct her. The chorus of nuns is heard. Leonora is among them, and once more declares her intentions to Ines. When the count, with Ferrando and followers, arrive to take her away, Manrico with Urgel’s men get there just in time, disarm the count, and leave with Leonora.

Act III. The gypsy’s son. The count’s army is camped near Castellor. The soldiers are certain that they will win tomorrow’s battle. The lookouts take prisioner a gypsy that Ferrando recognises: she is Azucena, guilty of the atrocious infanticide. In vain, Azucena denies everything; brought before the thugs, she invokes Manrico’s aid. The count thus realises that his prisoner is his rival’s mother and sees an opportunity to vindicate his brother. In the chapel of Castellor, Manrico and Leonora get ready to be married. Ruiz, breathless, arrives to tell what has happened to Azucena. Manrico tells Leonora that Azucena is his mother and hurries away to save her.

Act IV. The execution. Manrico is held prisoner in the Aliaferia palace. Leonora, accompanied by Ruiz, goes to the palace and hears Manrico’s last adieus, but, determined to save him, offers herself to the count in exchange for her beloved’s life. Then, with the count’s permission to give the news of his freedom personally to Manrico, she starts toward the prison. While the count gloats, she sucks the poison from a gem to keep herself from him. In the prison, Manrico comforts his mother. At Leonora’s arrival, he guesses at what price she has bought his freedom for him and accuses her of betrayal. But as the effects of the poison start to take hold, he at last understands the nobility of her sacrifice and can only crumble in grief. The count arrives, realising he has been fooled by Leonora, who dies. Manrico is consigned to the soldiers, and the count obliges Azucena to watch the execution. But, to the overwelmed count, she declares, “He was your brother. The mother is avenged.”