Dad had a rough childhood that came from the poor economic situation of his divorced mother and the general poor condition of the state of Israel in the forties.

Dad’s mom, my grandmother, was born in Tiberius, on the shore of Lake Galilee. The family she came from was known to be at least for 12 generations on the land of Israel.

This is an important fact in the history of my family.

The exile of the Jewish people that is now more then 2000 years old, has brought many of them to distant locations, all around the globe. It was only a small portion of people who never left the Holy Land. My Grandmother’s family is most likely among them.

“I am a Palestinian” Dad used to say. I was born here, my ancestors are from here. Dad used to argue with those who tried to challenge the rights of the Jewish people over the Holy Land.

The life story of my Dad is strongly connected with the birth and the development of the state of Israel. Dad was educated in Tel Aviv and joined the army when he was 18 as a part of the compulsory service law in the newly born State of Israel (May 1948).

His military career went through the glorious chapters of the build-up of the I.D.F. (Israeli Defense Forces)
Graduating officers’ course, he went up in his career taking an active part in the front of the doing. Dad had to participate to the Sinai Operation in 1956, in the “Six Days War” of June 1967, in the continuous conflict along the Suez Canal: the Israeli – Egyptian conflict line, and in Yom Kippur war, in October 1973.

In July 1967, Dad left with the family for a mission to Uganda. His task was to train the “Special Force” of the Ugandan Army which was on the job of guarding the President (Dr. Apollo Milton Obote). The years in Uganda were a kind of a rest for Dad, and a wonderful experience for us all. Later on, the time in Uganda will be remembered as the happiest time of my childhood.

In 1978, Dad left the military after 35 years of service and joined the reserve active forces of the I.D.F.
However, Dad was not quiet a “Reservist”. In the war with Lebanon in 1982, Dad was an active commander in the troops that were stationed around Beirut, as the Palestinian forces, led by Arafat, fled to the port of Beirut and on to Tunisia.

That time wrote an interesting chapter in my memories with Dad. At that war, we were both in uniform, both in active service and we met a few times on the front lines of the war.

Retired from the army? Yes. Retired from his obligations towards the state of Israel? No.
The Jewish National Fund sent dad to Canada. The family (without me) lived in Vancouver, British Columbia in Canada.

In Canada, Dad gained diplomatic experience as well as a real upgrade of his skills of representing the cause of the Jewish people and the state of Israel. Dad’s mission in Canada became a story of success. His connection went across the board. He integrated with the local Jewish leadership. He was a welcome frequent speaker in the local Christian world and a desired guest in the highest business community.

Coming back to Israel in 1981, we all suffered the loss of Dad’s Mom. My grandmother was a great lady who we all loved so much.

Soon after his return, he established a travel business that specialized in promoting the state of Israel among the Christians in the USA and Canada, who felt they wanted to know more about the Holy Land, as of private or religious matters.
Today, my brother Raanan (Rani Levy) is the leader of this enterprise which is following Dad’s way of combining businesses together with promoting the interest of the State of Israel, as the home of the Jewish nation.

In 1989, Dad was appointed as the president and the publisher of the Jerusalem Post. The JP was then the only English published newspaper in Israel. Dad had the mission of turning a loosing business into a success. He had to struggle with the Unions, facing violent demonstrations of activists within the JP who were against firing personnel for efficiency reasons.
Dad did not give up. For him, it was the same type of a fight, believing that the cause is just and there was no other way. After the personnel trim, after some costs cutting and proper marketing activities, the JP started to show profits, and was turned from a loosing business into a profitable business.

Dad left the JP, after serving in the position of the President and publisher for almost 10 years. He started evaluating his future business plans, while taking some time to rest at home.

Dad has left a crucial fingerprint on my personality. Often, I find myself thinking “What would he do now”. Dad was somewhat tough, but very kind. He was the clever person to ask for an advice. Dad was the person whose presence could never remain unnoticed. He always had a nice joke and something to say that was worth hearing. 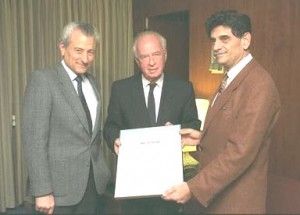