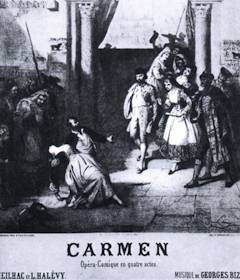 ACT I: Corporal Moralès and the soldiers while away the time watching the passers-by, among whom is Micaëla, a peasant girl from Navarre. She asks Moralès if he knows Don José, and is told that he is a corporal in another platoon expected shortly to relieve the present guard. Avoiding their invitation to step inside the guardroom, Micaëla escapes. A trumpet call heralds the approach not only of the relief guard but also of a gang of street urchins imitating their drill. As the guards are changed, Moralès tells José that a girl is looking for him. Zuniga, the lieutenant in command of the new guard, questions Corporal José about the tobacco factory. A stranger in Seville, Zuniga is apprehensive of the dangerous atmosphere of the locale.

The factory bell rings and the men of Seville gather round the female workers as they return after their lunch break. The gypsy Carmen is awaited with anticipation. When the men gather round her, she tells them love obeys no known laws (Habañera: “L’amour est un oiseau rebelle”). Only one man pays no attention to her – Don José. Carmen throws a flower at him. The women go back into the factory and the crowd disperses.

Micaëla returns, bringing news of José’s mother. She has sent Micaëla, who lives with her, to give him a letter (“Parle-moi de ma mère”). José feels that his mother is protecting him from afar. When he starts to read her letter, Micaëla runs off in embarrassment since it suggests that he marry her. At the moment that he decides to obey, a fight is heard from within the factory. The girls stream out with sharply conflicting accounts of what has occurred, but it is certain that Carmen and one of her fellow workers quarreled and that the other girl was wounded. Carmen, led out by José, refuses to answer any of Zuniga’s questions. José is ordered to tie her up and take her to prison. Carmen entices him to go dancing at Lillas Pastia’s tavern outside the walls of Seville (Séguedille: “Près des remparts de Séville”). Mesmerized, José agrees to help her escape. He unties the rope and, as they leave for prison, Carmen slips away. Don José is arrested.

ACT II: Carmen and her friends Frasquita and Mercédès entertain Zuniga and other officers (“Les tringles des sistres tintaient”). Zuniga tells Carmen that José has been released this very day. A torchlight procession in honor of the bullfighter Escamillo is heard, and the officers invite him in. He describes the excitements of his profession, in particular the amorous rewards that follow a successful bullfight (Toreador’s Song: “Votre toast”). Escamillo then propositions Carmen, but she replies that she is engaged for the moment. He says he will wait. Carmen refuses to leave with Zuniga, who threatens to return later.

When the company has departed, the smugglers Dancaïre and Remendado enter. They have business in hand for which their regular female accomplices are essential (“Nous avons en tête une affaire”). Frasquita and Mercédès are game, but Carmen refuses to leave Seville: she is in love. Her friends are incredulous. José’s song is heard in the distance. (“Dragon d’Alcala”). The smugglers withdraw. Carmen tells José that she has been dancing for his officers. When he reacts jealously, she agrees to entertain him alone (Finale: “Je vais danser en votre honneur”). Bugles are heard sounding the retreat. José says that he must return to barracks. Stupefied, Carmen mocks him, but he answers by producing the flower she threw and telling her how its faded scent sustained his love during the long weeks in prison (Flower Song: “La fleur que tu m’avais jetée”). But she replies that he doesn’t love her; if he did he would desert and join her in a life of freedom in the mountains. When, torn with doubts, he finally refuses, she dismisses him contemptuously. As he leaves, Zuniga bursts in. In jealous rage José attacks him. The smugglers return, separate them, and put Zuniga under temporary constraint (“Bel officier”). José now has no choice but to desert and join the smugglers.

ACT III: The gang enters with contraband and pauses for a brief rest while Dancaïre and Remendado go on a reconnaissance mission. Carmen and José quarrel, and José gazes regretfully down to the valley where his mother is living. Carmen advises him to join her. The women turn the cards to tell their fortunes: Frasquita and Mercédès foresee rich and gallant lovers, but Carmen’s cards spell death, for her and for José. She accepts the prophecy (Card Song: “En vain pour éviter les réponses amères”). Remendado and Dancaïre return announcing that customs officers are guarding the pass: Carmen, Frasquita, and Mercédès know how to deal with them (“Quant au douanier”). All depart. Micaëla appears, led by a mountaineer. She says that she fears nothing so much as meeting the woman who has turned the man she once loved into a criminal (“Je dis que rien ne m’épouvante”). But she hurries away in fear when a shot rings out. It is José firing at an intruder, who turns out to be Escamillo, transporting bulls to Seville (“Je suis Escamillo”). When he refers to the soldier whom Carmen once loved, José reveals himself and they fight. Carmen and the smugglers return and separate them. Escamillo invites everyone, especially Carmen, to be his guests at the next bullfight in Seville. José is at the end of his tether. Micaëla is discovered, and she begs José to go with her to his mother but he furiously refuses (“Dût-il m’en couter la vie”). Micaëla then reveals that his mother is dying. José promises Carmen that they will meet again. As José and Micaëla leave, Escamillo is heard singing in the distance.

ACT IV: Among the excited crowd cheering the bullfighters are Frasquita and Mercédès. Carmen enters on Escamillo’s arm (“Si tu m’aimes”). Frasquita and Mercédès warn Carmen that José has been seen in the crowd. She says that she is not afraid. José enters. He implores her to forget the past and start a new life with him. She tells him calmly that everything between them is over. She will never give in: she was born free and free she will die. While the crowd is heard cheering Escamillo, José tries to prevent Carmen from joining her new lover. Carmen finally loses her temper, takes from her finger the ring that José once gave her, and throws it at his feet. José stabs her, and then confesses to the murder of the woman he loved.